A painting is not a window.

Daubing away at an insane asylum in the South of France, Van Gogh could not, in his wildest fever dreams, imagine Irises adorning your aunt’s tea towels, nor Starry Night as Venice Beach photo-op mural. Adrian Ghenie smears a gooey brush through a museum full of history, carefully prodding the tenderest parts, the darkest moments. Eugenics and slapstick are equally culled. The ineffability of genocide might be limned by a childhood tchotchke, a “good” painting of a dictator might be taken as a dare.

In the wake of Ceau?escu, Ghenie spackles the lacunae of his formal education at will. Fuck the brush. Instead he favors the palette knife to whip, frost, and smear cultural memory with lived experience. Now and again the unruly swirls of color stop short against the cliff of a stencil’s edge, delineating the brim of a hat, the curve of a jacket, the gnarled border of face where an ear should have been. Layer by layer, his paintings incorporate the compromises of vision—by faulty recollections, by redacted histories, by flawed photo reproductions gazed at by candlelight—resulting in a polysemy of iconic appropriations.

From classic cinema to social media to civic archives, Ghenie jabs his knife. They all bleed mercilessly, but nothing dies that wasn’t already a ghost. The freeplay is nudged onward. With a twist of the trowel, he pries off an iconic face and tries it on for size. Hitler takes a pie in the kisser. Sploogy rain begs innuendo. This is not a window. This is life, the wet smack of a body against the edifice of history. 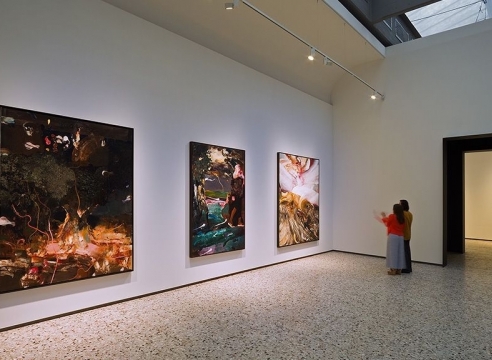 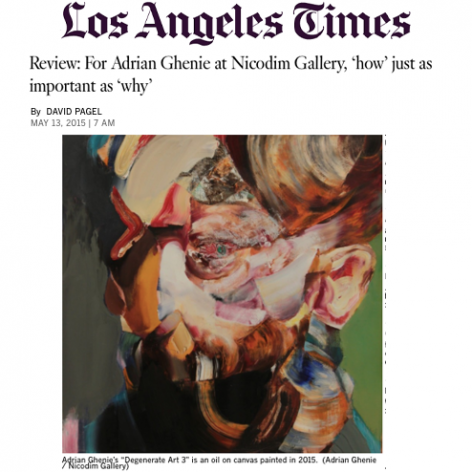 The relationship between subject and style, or form and content, is integral to Adrian Ghenie’s 10 oils on canvas at Nicodim Gallery. Based in Berlin, the Romanian artist paints portraits: small close-ups of men’s heads and large landscapes, each populated by a solitary individual. In terms of subject matter, Ghenie’s paintings are all about alienation and the angst that accompanies it.