Daniel Pitín thrives in expectation, it is a color in his pallette. He knows we know the fictional characters that populate his canvases via cultural osmosis, that we’re familiar with the archetypes. Even if one has never seen the films portrayed within Pitín’s work, he inherently understands the inferred relations within each piece: Grace Kelly is humoring the overactive imagination of a hobbled James Stewart, Robert DeNiro is asking you talkin’ to me?

While Pitín’s primary reference points are classic Hollywood, both his filmic and painted compositions are constructed and choreographed more like sets on theater stages, which in turn recall the early pages of western art history—there’s as much Velásquez in the underpainting as there is Hitchcock on the surface. Each frame is a window positioned with a view towards pending drama. Pitín’s upbringing in communist Czechoslovakia familiarized him with constant outside surveillance from an early age, and the capitalist, post 9-11 iPhone generation has only upgraded this awareness. The architecture of each of his scenes is a constant reminder that his viewer is not dissimilar from a chair-bound James Stewart in Rear Window, voyeuristically waiting for something to happen, while simultaneously reminding us that someone is always watching.

A coming detonation is implicit in each work. Every hue, every brushstroke, every negative space is one of Chekhov’s guns. His scenes thrive in these pregnant moments before the explosion, teasing-out the irony that his audience knows those voids will be filled when they least expect it.

Daniel Pitín (b. 1977, Prague, Czechoslovakia) is a leading figure among the generation of artists to have emerged since the fall of communism in Central and Eastern Europe. He received his education from the Academy of Fine Arts, Prague, Czech Republic in 2001, and continues to live and work in Prague. Recent exhibitions include A Race of Peeping Toms, Nicodim Gallery, Los Angeles (2020, solo); A Paper Tower, Galerie Rudolfinum, Prague (2019, solo); Formal Encounters, Galeria Nicodim, Bucharest (2018); Broken Windows, House of Art, ?eské Budejovice (2018, solo); Grotto, Charim Gallery, Vienna (2018, solo); Crystal Gardens, GRIMM, Amsterdam (2017, solo); The Mechanical Flowers, Nicodim Gallery, Los Angeles (2017, solo). Pitín is collected by the the Los Angeles County Museum of Art and the Knoxville Museum of Art, and his solo institutional exhibitions include Cover Story, Boulder Museum of Contemporary Art (2012); and After the Fall, Hudson Valley Center for Contemporary Art, Peekskill, NY and the Knoxville Museum of Art, Knoxville, TN (2011). 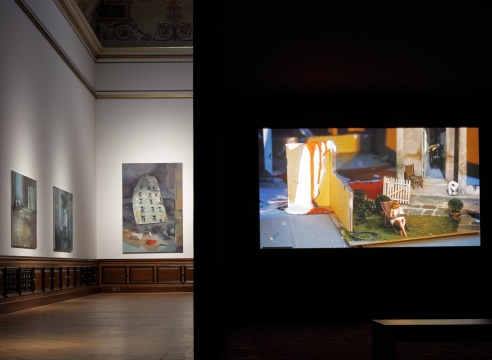 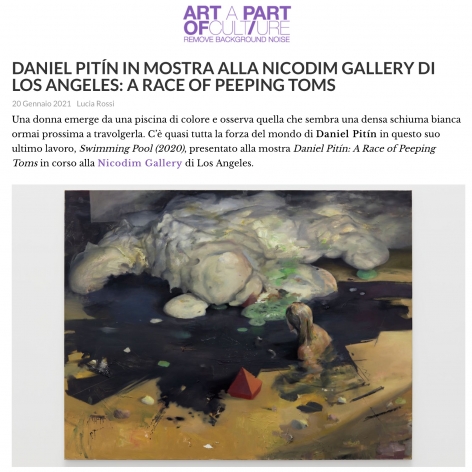 If the expressive analogies may seem similar, the underground elements in Pitín are perhaps more complex than they are in the reality we live today. Information and meanings come together, overlap, hiding and then returning to the light. Impulses that emerge from all sides, to disappear and reappear more insistent and finally populate architectural scenes that are now more real and known.