Vulnerable, but not a victim, Ecaterina Vrana is not a typical instance of art-related art, directed by chance-related life. Since her early years as an art student, the people around her (professors and fellow students as well) realized that something was wrong (or conversely, right) with her: she could not, under any circumstances, assimilate even the basic elements of the trade, neither the purely technical ones nor the more pervasive, cultural idiom currently associated with being an artist. Her vocation was so deep, personal, compelling and wildly overwhelming that, despite undergoing the teaching as if a routine surgery, she survived almost unsoiled by it. Day by day she grew more naïve, more inexperienced. Education made her savage. She read no art journals, visited no museums, assisted to no art talks. Instead of developing common skills she developed subjective roughness. Her exams were a calamity?– she could not render a given theme and was unable to talk about a given (famous) artist, local or international, living or dead. Artistic trends remained a mystery to her, as well as criticism and social engagement. In a time of extreme historical and political turmoil, Ecaterina Vrana remained one-sided: her-sided.

Her living was riveted by desire, trauma and death: coffins, crosses, rats, doctors and priests were regular occurrences in her anguish-fattening paintings.

If trying to see and understand through her work something about current Romanian matters, one would be severely frustrated – there is nothing about Romanian Revolution in her work, nothing about Communism, strikes and social unrest, nothing about Orthodox belief, nothing about discrimination and manipulation of any kind, nothing about social hopes, ideals, and crisis. Seen through the dis-looking glass of her canvases, culture seems a dead-end, history an absence, and society a mere shadow.

Still, there is something to be seen in her work – a perpetual crisis and fervor generated by only three elementary (and everlasting) milestones: Life, Love, and Death. One would reasonably argue that the three words have nothing conceptual, that they are totally mystified by cultural constructions. One would justifiably claim that embracing them shows a total mental captivity and an exposed infantile reification of socially-driven abstractions. Yet the paintings of Ecaterina Vrana are not unaware of the tricky, consumerist nature of funny- witty storytelling. They are much more than girlish – they are indeed uplifting, as they are maybe the most cheerful depictions of grief available.

The crux of her canvases is neither the story, nor the sorrow, but the painting itself as the ultimate, authentic tactile presence. The fleshy, sparkling body of paint is so overpowering as a substance that it assimilates and digests everything – trauma, pain, insecurity, desolation or loneliness, bringing in a certain, idiosyncratic experience of redemption. Though adamantly figurative, her painting is not representational, but rather haptic. A matter of spiritual transference, her work is not a representation of the lust for life, but the lust for life in itself: a viscid lump of scintillating agony.

Usually, artists dress themselves either in politics, culture, sex or intellect, various displacements for symbolic power. Ecaterina Vrana is putting on none of the cool garments of the given idiom of current art. There is no place in her work for slogans, for political statements or for social engagement. Sex is also almost missing from her work, while nudity itself is rare, too. Ecaterina Vrana dresses herself in the surrounding life. Her procedure seems to be derived from that of the ancient humans of Altamira – conjuring and internalizing the world around game around, on a daily basis – but what a visual feast they enacted in their stirring depictions!

Similarly, most of the gifts that Ecaterina Vrana bestows upon her paintings are utterly absent in her daily life. But this is not hampering her to extoll their inner presence, making them fleshier than life, than the tedious intakes of common distress.

Eccentric and unremitting, the irreducible and impenitent narcissist Ecaterina Vrana is not a representative of today’s Romanian art. She is not a representative for anything except for herself. She is not linked to any local tradition, to any School, be it formal or informal. She is not a container of information about a certain area, of a certain age or gender. She does not instrument her belonging in order to become a geo-social-sexual symptom. Beside her own person, she has never asked attention for anything else except for her paintings, seen and introduced as pure battlefields of shapes and colors.

All her paintings are soaked in the experience of being alive. Seemingly incapable of distancing herself – either conceptually, reflectively, critically or strategically – and unable (or maybe unwilling) to take a step back from her egotistic activism or from anything wise or otherwise, she is exclusively and autistically indulging in her very own being, in her tumultuously abrupt life. Painting is a leech sucking up all the rotten blood on her face turned into a sore, after being incessantly struck. As fat and sleek as a leech that has had its fill, the painting tumbles down upon the beholder that has been seemingly overawed by the strident impudence: her paintings ooze the whole spectrum of horrors coming out of a stark-naked ego, which has not even been covered by the see-through veil of culture, letting out into the open her naughtiest instances of longing and her most detailed debt lists ever.

Ecaterina Vrana’s art might seem regressive, but in fact it is brutally primeval and instinctively transcendental. Her canvases are merely a makeshift of the cave wall which she daubs ceaselessly in pigment, hoping that one day, the cow, the sheep, the chicken or the human that were painted there will get entangled in her spells so that she may go on to feed handsomely the orgy of fears that keep pushing her around. Hence the reason why her paintings cannot be further from their being “a secondary game and purer at that” as they are instead a primary game, the most ritually unclean and raw game that there ever was: the game that brings about ceaseless desperation, the shock and awe of finding out that pain doesn’t kill, but it generates addictive existence.

Text from her upcoming catalogue by Erwin Kessler.

With thanks to the Romanian Cultural Institute New York for their support. 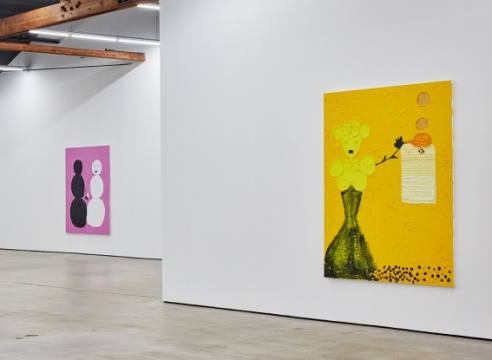