Galeria Nicodim is pleased to present a group show featuring Alex Niculescu, Przemek Pyszczek and Isabel Yellin. Working within the contemporary parameters of assemblage, all three artists approach issues of collage and montage through the lens ofsculpture, each artist working to push past an objective view of the medium. Assembled from seemingly municipal metal supply, each of Przemek Pyszczek’s wall-based works defies its material’s democratic origin. Obliquely referencing Modernist design and aesthetics, Pyszczek’s forms come in an unassuming package, nodding to both public art and urban design. Counter-intuitively, his populist forms entrance the viewer into something far more esoteric. These metal ‘windows’ welcome the viewer to peer into a distinctly non-accessible landscape, politicising the form thus transforming the function.

Similarly, Isabel Yellin’s patch-worked canvases reference a distinctly oppositional use of materials. Hanging from a ghost-like armature, her wall-based works ascribe themselves to the language of painting whilst removing the medium’s presentational props. Clinging to invisible threads of support, the draping canvases hang like curtains, a form which is underscored by her autobiographical titles,lending the work a distinct pathos. However, like Pyszczek, the work seeks to refute its material implications, in this case through the artist’s Ab-Ex use of paint, striking across the varied surfaces of the soft sculptures.Alex Niculescu’s sculptures present a bevy of lush detritus, hovering in a contradictory realm of material dissolve. Plinths of cast-like debris present a low-landscape of modeled, Technicolor excretions. Showing physical, almost performative, signs of both the producer as well as his product, Niculescu’s work references early Californian conceptualism, calling into question the finality of a work and the many facets of such definition. 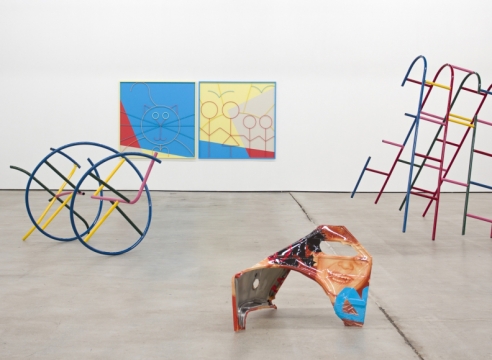