Mihai Nicodim Gallery is pleased to present “One Plus One Equals One” an exhibition that brings together three artists belonging to the Romanian-Jewish avant-garde of the 1920s and 40s - Marcel Iancu, Isidore Isou and Gherasim Luca, and two other artists, Ana Lupas - belonging to the generation of the 60s, and Teodor Graur – the 90s. The exhibition contains a series of documentary works, avant-garde journals, some of them exhibited for the first time, manuscripts and experimental etchings.

The Romanian-Jewish avant-garde from the early decades of the 20th century took by storm the art-world through their fearless experimentation and proposed a radically revolutionary method that pushed beyond the limit the changes engendered by the aesthetic attitude introduced by modernism.

Marcel Iancu (1895 - 1984) was a Romanian-Israeli artist and art theorist, who, alongside his poet friend Tristan Tzara co-founded and played a crucial role in the development of DADA. He was also a leading exponent of Constructivism in Eastern Europe. Along with Tristan Tzara he co-founded the anti-establishment Cabaret Voltaire in Zurich. The first-ever Dada event took place in Cabaret Voltaire, Zurich, on Feb 1916.

Isidore Isou (January 31, 1925 – July 28, 2007) was a Romanian-born French poet, film critic and visual artist. He was the founder of Lettrism, an art and literary movement, which owed inspiration to Dada and Surrealism. Born into a Jewish family, Isou started his career as an avant-garde art journalist during World War II. He co-founded the magazine Da, which was soon after closed down by the authorities. He moved to Paris, having developed many concepts that intended as a total artistic renewing starting from their lower levels. He called himself a Lettriste, a movement of which he was initially the only member (at the age of 16 he had published the Manifesto in 1942) and published a system of Lettrist hypergraphics. Others soon joined him, and the movement continues to grow.

Gherasim Luca (23 July 1913 – 9 February 1994) was a Surrealist theorist and a Romanian poet. Born in Bucharest the son of a Jewish tailor, he spoke Yddish, Romaian, German and French. During 1938, he traveled frequently to Paris where he was introduced to the Surrealist circles. World War II and the official antisemitism in Romania forced him into local exile. During the short pre-Communism period of Romanian independence, he founded a Surrealist artists group, together with Gelu Naum, Paul P?un, Virgil Teodorescu and Dolfi Trost. His first publications, including poems in French followed. He was the inventor of cubomania and, with Dolfi Trost, the author of the statement "Dialetic of the Dialectic" in 1945. Harassed in Romania and caught while trying to flee the country, the self-called étran-juif ("StranJew") finally left Romania in 1952, and moved to Paris through Israel. There he worked among others with Jean Arp, Paul Celan, François Di Dio and Max Ernst, producing numerous collages, drawings, objects, and text-installations.

Ana Lupas (born 1940 Romania) lives and works in Cluj, Romania. Her practice extends from the 60’s now, and ranges from tapestry and textile objects to performances, installations, films and happenings. Her approach offers a conceptual perspective on the production of art that combines institutional criticism and politics. She evolved from a two-dimensional concept of tapestry towards an original attempt to work in a three-dimensional context. She was quickly recognized internationally as an innovative designer, whose suppleness of technique (passing from high warp to ikat, or the Oriental tassel technique) enabled her to move beyond the confines of conventional tapestry design to participate in installations and happenings. In her work the textile is set in opposition to hard elements, such as wood or stone, or unexpected ones, such as leather or fruit, forming only the ambient structure of an idea of a space. Lupas's ecological concerns, which dominate much of her work, were first expressed in optimistic works made from wheat sheaves and by installations such as the one executed with the help of peasant women in a Transylvanian village, who unfolded on a hill huge rolls of white hand-woven fabric. Through her work, she influenced an entire generation of artists of the 1970s Romania.

Teodor Graur (born 1953 Romania) lives and works in Bucharest, Romania. Teodor Graur’s practice is a practice mainly of re-creation and recycling. He takes gestures, attitudes and Eastern European cultural symbols and places them in an ironic and open dialogue with the modern art. To invent new conceptual instruments and to have a subtler perception of the present, Teodor Graur has become interested in the changes and transformations that operate today in the social and artistic fields. His guiding beliefs shift between two spatial and temporal coordinates: a local and ordinary one, reflected by his pursuit of the present, and a transnational, Eastern and/ or Balkan one, expressed by the identity interrogative discourse. Starting from 2000, Teodor Graur is more concerned with his artistic identity. He is in search of a new mean of expression, gradually exceeding the image-based forms of manifestation (painting, photography, video) and becoming interested in creating objects, realities, and installations. His dominant visual approach is close to bazaar, fair, market - a temporary and nomadic compound of materials and products with various origins. Recycling, reinterpretation, re-evaluation or symbolic conversion can become a method, while spatial exposure, an aesthetic. 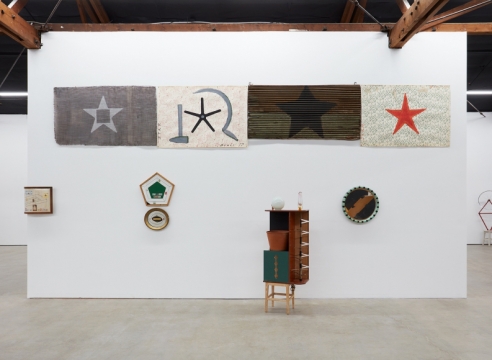