Mihai Nicodim Gallery is pleased to present "Overview”, the third solo show in the gallery of the Romanian artist Serban Savu.

Born in 1978, Serban Savu is part of a group of artists from Cluj, Transylvania, schooled in the tradition of Social Realism, who grew up during the fall of the Communist regime and who, now, lives and works in Romania, as it transitions into a free-market economy.

“Overview” explores the daily realities of life in Romania after the end of Cold War and opens a window into the lives of present-day Romanians. Savu draws with ease from classical European pictorial traditions – his works show a remarkable sense of observation matched by a subtle handling of color and geometrically rigorous composition. In some of Savu?s painting there is a willful tightness to the realism, while in others a delicious touch of early impressionism.

The scenes, the people and activities look familiar and strange in the same time, thus demonstrating the anonymity of an existence perpetually at the brink in the vast sociopolitical machine.

Often, the favorite Savu scenes are set outdoors. In response to the false grandeur of the former Communist era, Savu paints buildings and industrial structures, which often represent imposing vestiges of that time, then he pursues to decorate their surroundings with quiet grassy landscapes, thus colliding the pastoral with the industrial. Another favorite theme in Savu?s paintings is the solitary figure, usually a worker who dominates his or her setting. The mood and purpose are consistent and there is a sense of alienation that transgresses every image. 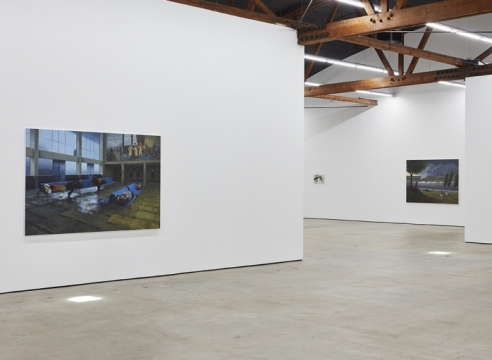